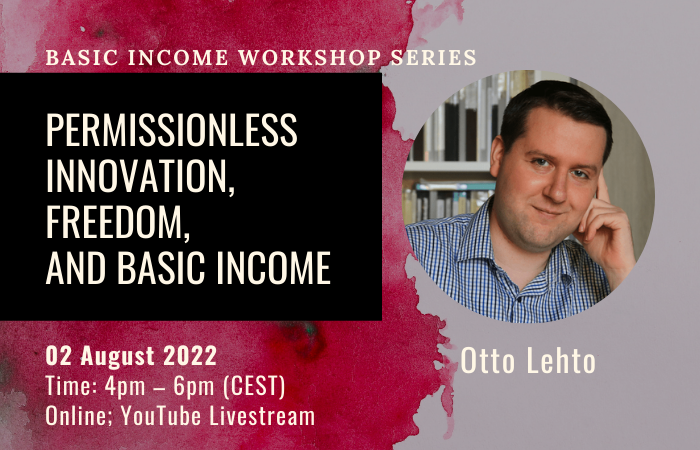 On Tuesday, 02 August 2022, the Basic Income Workshop Series continues with a contribution of Philosopher & former FRIBIS visiting scholar Dr. Otto Lehto: „Permissionless Innovation, Freedom, and Basic Income“. He is going to present his input and subsequently have a discussion with the audience, Prof. Dr. Karl Widerquist & Prof. Dr. Bernhard Neumärker.

Do you wish to participate in the Zoom-Meeting directly? Send an E-Mail with your request to eventmanagement@fribis.uni-freiburg.de.

Basic income has been tied to „real freedom for all“ (Van Parijs), „capitalism and freedom“ (Friedman), „freedom as the power to say no“ (Widerquist), and many other conceptions of freedom. All of these theories of freedom, despite their differences, involve an institutional structure of rights that gives people the right (both formal and substantive) to experiment with new things, to deviate from the expectations and demands of other people, and otherwise to innovate in a myriad ways. In my talk, I interrogate the relationship between the notion of freedom inherent in such popularconceptions of basic income and the theories of innovation proposed in evolutionary political economy. (Schumpeter, Hayek, Hogdson, Beinhocker) I will argue that basic income could be seen as a tool of permissionless innovation, which grants people, especially poor people, the right to innovate without having to ask anybody for permission. I will normatively justify this right, not in terms of justice or equity, but in terms of a utilitarian theory of evolutionary welfare enhancement. I will argue that radical innovation is a compelling justification for a liberal implementation of basic income, and innovation should be encouraged in order to more effectively solve the problems of the poor. Crucially, socioeconomic innovation, in this technical sense, extends beyond the economic realm of goods, services, and technologies, to the cultural realm of habits, ideas, and social norms. However, the innovation perspective only justifies certain models of basic income that a) are tied to an extensive regime of market and civil freedoms and b) pass a comparative cost benefit analysis of institutional alternatives. This consequentialist conception challenges several prominent justifications, models, conceptualizations, and implementations of basic income, especially those that see UBI more as a means of stabilizing, equilibrating, or decelerating modernity.