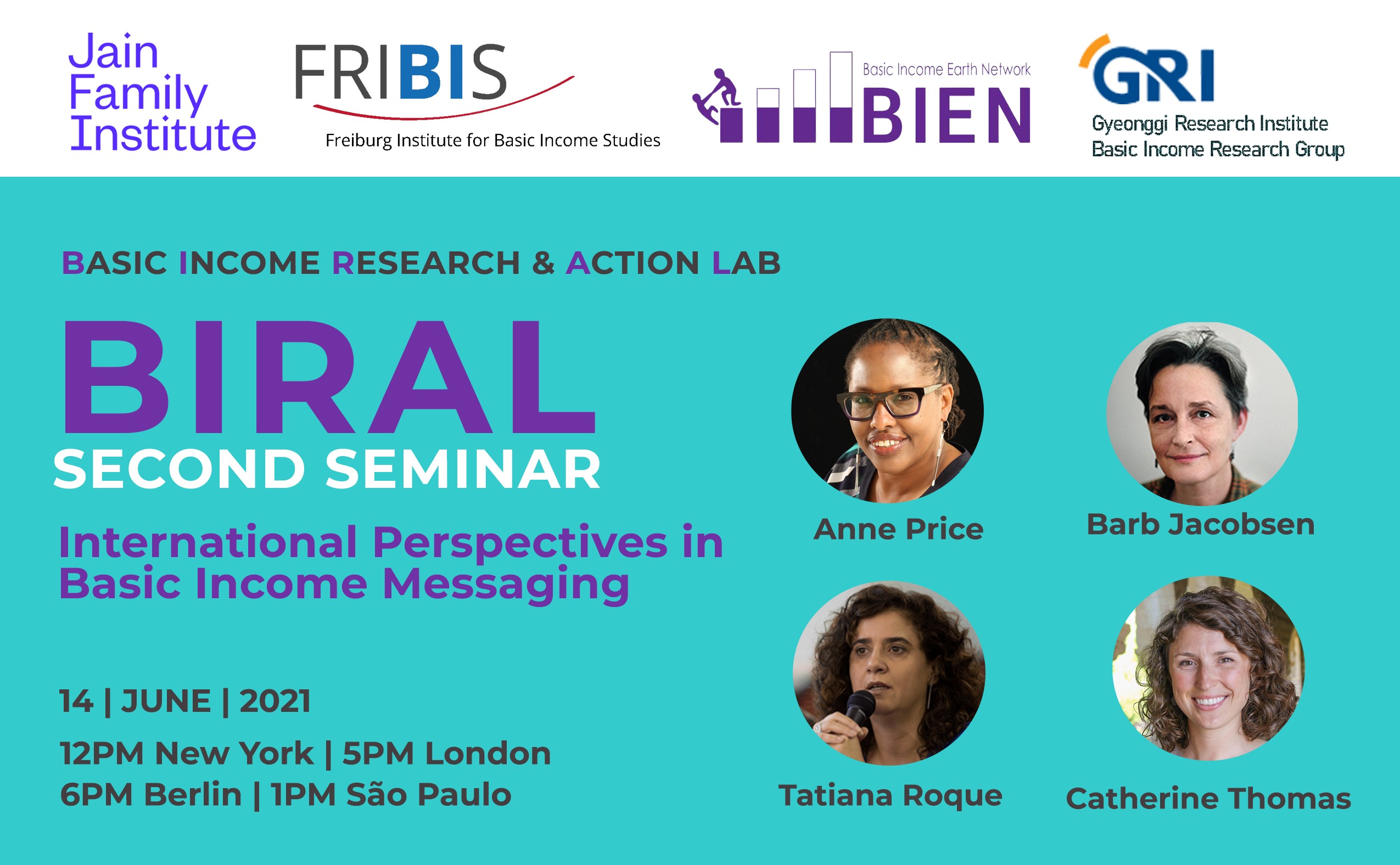 BIRAL, a collaboration between the Basic Income Earth Network (BIEN), the Basic Income Research Group of the Gyeonggi Research Institute (GRI), the Jain Family Institute (JFI) and FRIBIS, invites to a roundtable discussion. Participants in this event will discuss messaging and framing techniques to build support for guaranteed income or UBI in varying political and cultural contexts.

You can find a recording of the discussion on the Youtube channel of BIRAL: https://www.youtube.com/watch?v=SJFWz8Ba1d0

The 19th Annual North American Basic income Guarantee Congress (NABIG) will be held virtually between June 17 and 19, 2021. The event will be open to the public, its topic is “Basic Income: Knowledge, Activism, Policy”. More than 90 prominent participants from academia, activism, politics, and the arts will be in attendance. Further information at: https://www.nabigcongress.com/

You can find recordings of the contributions at https://www.crowdcast.io/nabigcongress 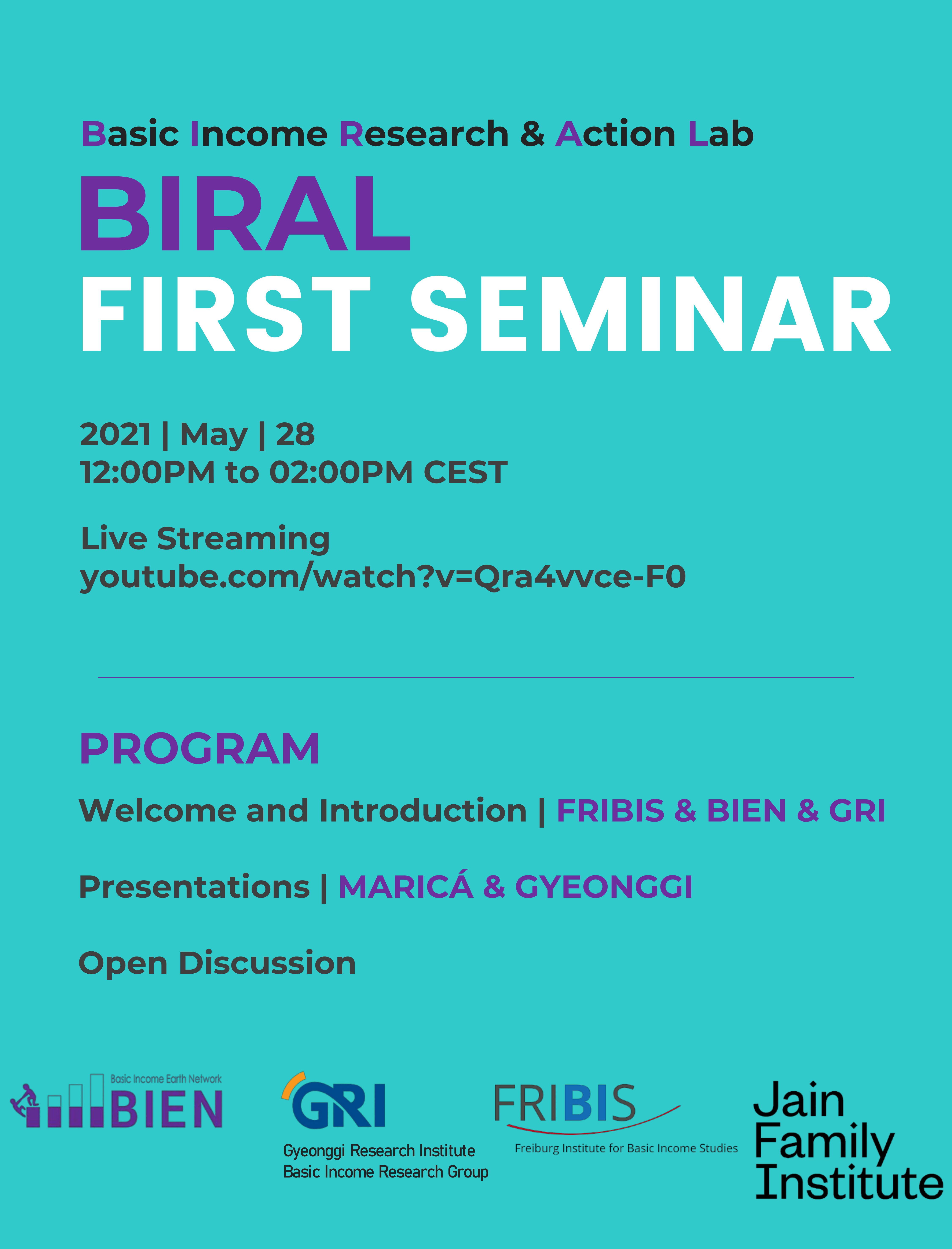 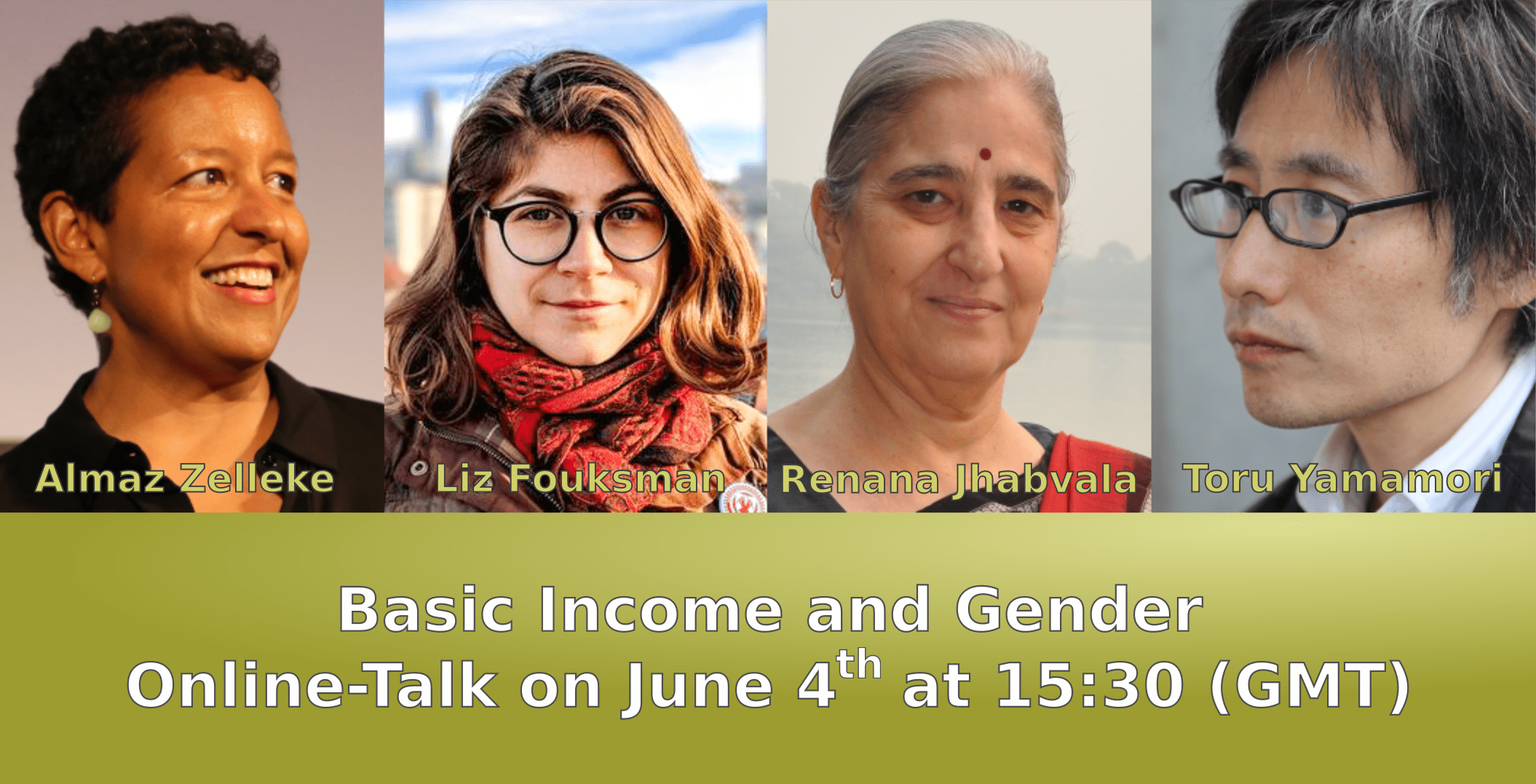 What opportunities does the UBI open up specifically for women? What is necessary? Does a UBI correspond more to women’s understanding of and relationship to work, the economy and income than to male-dominated ideas?

Can UBI promote gender-justice and gender-equality? Might it transform gendered notions of work, value and care? What political, economic and social demands emerge from a focus on women’s voices?

Almaz Zelleke, Professor of Practice in Political Science at the New York University in Shanghai, China. Almaz Zelleke specialises in UBI issues and specifically in UBI and gender. She is a member of the Basic Income Earth Network (BIEN) and the North American Basic Income Guarantee (NABIG) Network and of USBIG.

Dr. Liz Fouksman, Lecturer (Assistant Professor) in Social Justice at the Centre for Public Policy Research, King’s College London. Liz is an economic anthropologist. Her current research focuses on the grassroots views of the long-term unemployed in South Africa and Namibia on questions of redistributory justice, universal basic income and work.

Renana Jhabvala, president of SEWA Bharat, the All-India organization within SEWA family (Self Employed Women’s Association), 1,8 million women strong. Renana Jhabvala is co-initiator of UBI for women projects in Delhi and of the large UBI project in several villages in India in 2013 in Madhya Pradesh.

Toru Yamamori, Professor in Economics at the Doshisha University, Kyoto, Japan. His research is focused on feminist economics, economic philosophy and history of economic thought, and he has conducted an oral history on working-class women’s liberationists in the long 1970’s Britain. He is academic research editor of BIEN.

Moderation: Enno Schmidt, Research assistance at the Götz Werner Chair for Economic Policy and Constitutional Economic Theory at the University of Freiburg, Germany, co-founder of the Swiss UBI initiative and referendum about the introduction of UBI.

To register for the event, send an email to contact@fribis.uni-freiburg.de. You will receive the login details via email.

Workshop: Are UBI Experiments necessary to implement a UBI? 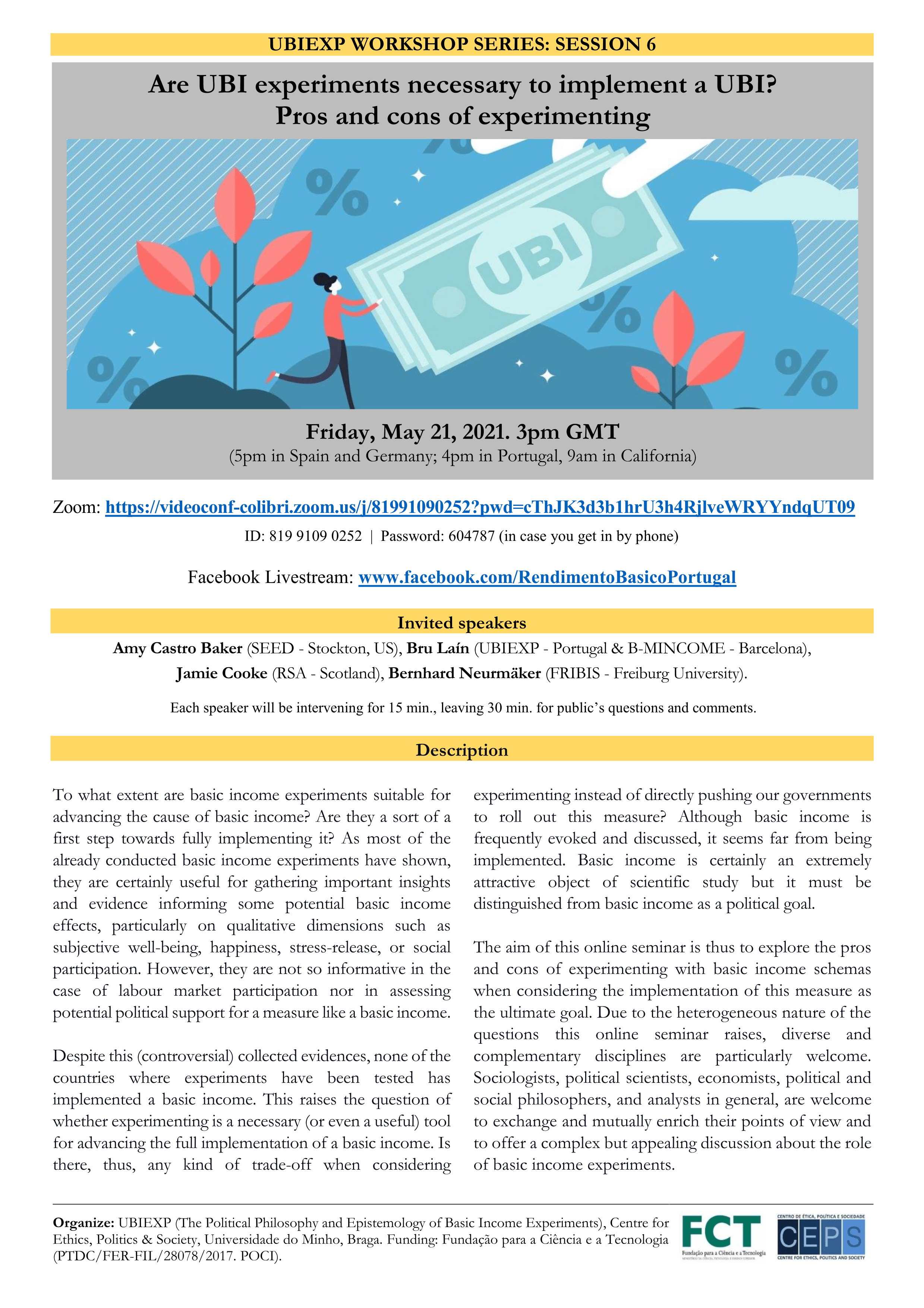 Discussion Panel on Stimulus Checks and UBI on Mai 20th

[from actionnetwork.org:]
In March 2021 US President Joe Biden passed a $1.9 trillion fiscal stimulus package. This included a third Economic Impact Payment of up to $1400. Most US residents qualify for Economic Impact Payments. All you need is a valid Social Security Number and an income of less than $75,000, if you earn more than that your payment will be reduced or phased out.

This is a popular policy, many people have started referring to this third payment as Biden Bucks. These payments, including the first of up to $1200 in March 2020 and second of up to $600 in December, have provided people across the US with vital income support as they cope with the fallout of the pandemic.

So, this is cash, paid with very few conditions almost universally across the US. A programme that is just a few steps away from a basic income.

Workshop: Ethics of UBI in a Changing Economy

On April 23rd, an online-workshop on the ethics of a Universal Basic Income is hosted by the King’s College London.

The workshop tackles the theoretical issues surrounding the normative justification(s) for UBI and evaluate the practical feasibility of UBI in comparison to competing policy responses from a political economy perspective. To register for the workshop, send an email to EUBI1@easychair.org. 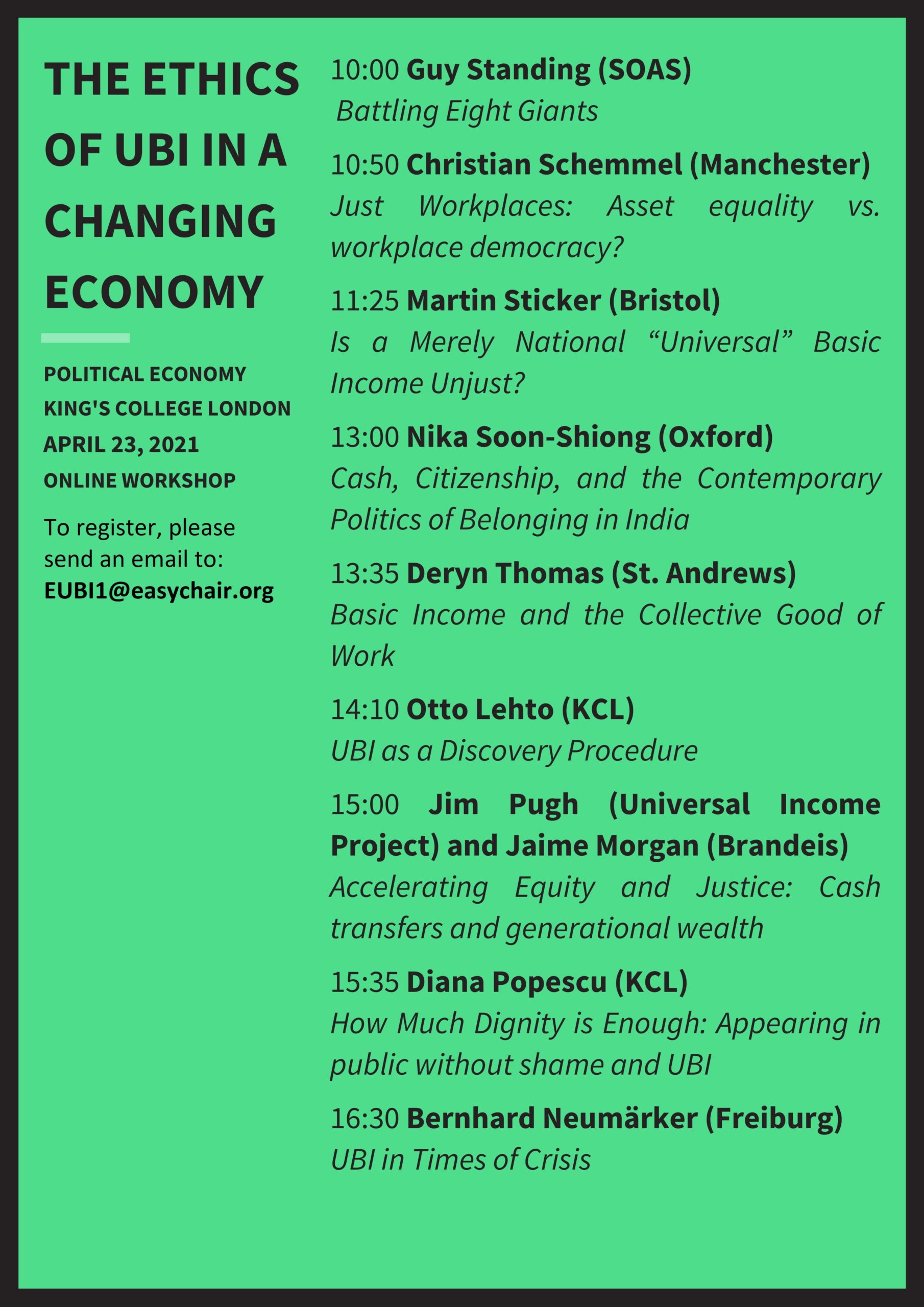 Debt-free sovereign money is now here. How come?
Because the Covid crisis has demonstrated its feasibility.

During the Covid crisis, many holders of government debt, such as mutual funds, foreign central banks, and hedge funds, had to sell their bonds to cover huge withdrawals by their own investors.

Central banks like the US Fed and the UK Bank of England intervened by purchasing their government’s bonds to hold up their price in order to keep yields down. Purchases cumulated to >$2 tn in the US and £875 bn in the UK.

As an unintended consequence, central banks now hold substantial government debt. Sure, the government has to pay interest to the central bank, and must ultimately redeem the debt, but this is one government agency in debt to another, ie it’s a zero sum game. It equates to debt-free sovereign money.

So the challenge now is why not issue debt-free sovereign money directly to fund basic income and the reversal of austerity cuts? This proposal is similar to Modern Money Theory, but differs from MMT by the important distinction that money should be created debt-free.